When our family travels, we are almost always “blessed” with layovers lasting several hours at connecting airports. It may have to do with the fact that our hometown airport—Medford, Oregon—is very small, and thus our outgoing flights don’t always mesh with ideal travel schedules. Whatever the reason, I’ve spent countless hours wandering around airports, people watching, browsing bookstores and luxury gift shops (who buys a $10,000 watch at an airport anyway?), and basically trying to while away the hours until my next flight. Thus, I’ve discovered that while some airports—San Francisco, I’m talking to you—offer just the basics like food, drink and shopping, others have put quite a bit of thought into this travel dilemma, and offer lots of fun ways to relax and pass the time. 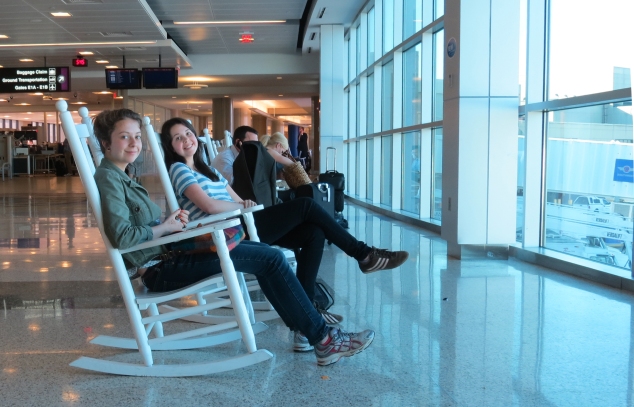 One of my favorites is the row of rocking chairs in the Seattle/Tacoma airport. There’s something wonderfully relaxing about being able to rock a chair while gazing out the window at planes silently taking off and landing. I realize the only difference here is a chair that rocks as opposed to a chair that is stationary, but it is far better than it may seem at first glance. Bravo Seattle.

On a recent trip we spent several hours in the Taiwan Taoyuan International Airport. Among other things, Taoyuan features a Mind Garden, with library books, relaxing bean-bag chairs, and a free cell phone charging station, where you can plug in your phone inside of a very cool locked charging station. This airport also features a live bamboo garden, with coin operated massage chairs tucked behind, a free x-box gaming station, and a Hello Kitty Lounge. You had me at the Hello Kitty Lounge Taiwan.

The first time our family traveled through Narita Airport in Tokyo, I remember being impressed by the free kids gaming room among other things. Now this airport features the Nine Hours Capsule Hotel, if you need to catch a few winks. And I thought the kids gaming center was cool.

After sampling some of the great amenities at classier airports, I’m fairly irritated by those who still charge for wireless internet—New York airports offer 30 minutes free—then charge by the hour thereafter. I’m also irritated when the old school airport chairs have armrests between every seat so you can’t stretch out for a nap if you have an extra long or even an overnight layover. 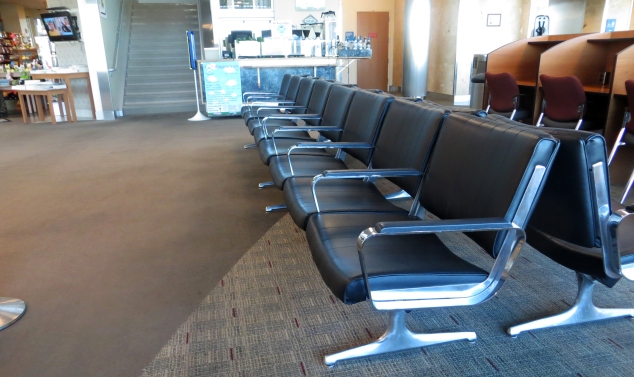 If you’re not going to offer me a rocking chair or a Hello Kitty Lounge, I feel like the least you can do is give me a comfortable chair while I wait for my next flight.

It’s flu season once again, and once again I have failed to get a flu shot. I’m not going to go on record and say that I’m healthy, because that will assure I’ll come down with a cold next week, but I will say I work hard to eat right, exercise and avoid situations that would compromise my health. But what about germs and travel? There’s only so much I can do to keep from getting other travelers’ germs, especially when the person right next to me is sneezing, sniffling and coughing from takeoff to touchdown.

A USA today article recently brought to light the most germy spots on airplanes and in airports, but I’m not sure you want to read it. Ick. Everything from influenza, diarrhea and MRSA have been found on airplane tray tables. Yuck. Every now and then when I’m wearing sandals and have to take off my shoes at the xray screening, I forget socks. Ick. Walking barefoot on the mats and during the scan CAN’T be good for me.

How can we keep from getting sick after flying? Well I for one could start by bringing socks. Some hand sanitizer might be a good idea too. Finally, research shows that the most germinated areas are those that people touch the most (shocking!), so if we can avoid touching with our hands the most commonly touched items, like the latches of overhead bins, and the door handles of bathrooms, we will be better off. Or, if like me, you haven’t figured out a way to open the latch of an overhead bin without using your hands, at least don’t touch your hands to your eyes, ears, mouth or nose until you’ve sanitized them. Achoooo!

Bob and I first became aware of the US Customs Department’s Global Entry Program in early 2013.  The Program offers expedited re-entry into the United States and expedited TSA screening for approved travelers at a growing number of domestic airports. Since we fly both domestically and internationally several times a year, we decided it might be worth $100 each to apply for the Global Entry program.

I’m sure it will come as no surprise to our readers to learn that the program’s application process is not the easiest to execute. Here’s how it went down for us.

First a few details. A Global Entry Pass costs $100, and is good for five years. With the pass, approved US citizens can skip customs lines and customs agents and instead go directly to an automated Global Entry kiosk, where with one swipe of your passport, an electronic fingerprinting and a photo, you are quickly approved for re-entry into the US. The same application also gains travelers access to the TSA Pre-Check program, where at participating airports approved travelers can go through faster, more efficient screening. Sounds awesome right? It is, but the application process does not work quite as efficiently.

You apply for the program online, and immediately pay the $100 fee. That part is easy. The tricky part comes in scheduling an in-person interview at one of the 38 Global Entry Enrollment Centers at airports in the United States. When we applied, the only west coast centers were in Seattle, San Francisco, and Los Angeles (the Portland International Airport has since opened an office). An interview appointment must be scheduled within 30 days of completion of the online application, and after your interview, you’ll know if you have been approved within two weeks, and you can immediately begin enjoying the benefits.

Soon after applying we attempted to schedule an appointment in San Francisco, but there were no available dates on their calendar, not one. I called the San Francisco Global Entry office (and spoke to a live person!), and was told there was a “glitch” in the system, and to try back in a few days. And the clock started ticking. A few days later: nothing. A week later: nothing. I called again, and was told they almost had it figured out, and not to worry as it would certainly be up and running before our 30-day deadline was up. Finally, with three days to spare, the San Francisco calendar at last showed availability, but only for three or four days within a three-month period. Living 350 miles from their San Francisco Airport office, we really wanted to schedule our appointment when we’d be there anyway – say, during a layover. But according to their online calendar that was impossible. So I called again. And on this third call the Customs and Border Protection officer gave me the scoop. He advised me to take any appointment and then reschedule whenever dates opened up that fit into my schedule. Who knew?!

So I did just that, but it took months of regular online checking to find a date that fit. We even dropped in to the Global Entry office at the SF airport once, when we had time to kill during a layover. But without an appointment, the officers would not even consider conducting our interview. We finally managed to make an appointment for October, during our layover en route to Shanghai, seven months after we applied to the program. 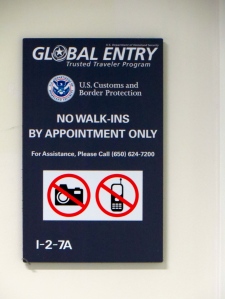 It took several tries to locate the Global Entry office at SFO. We asked several TSA employees, who you’d think ought to know about the Global Entry program right? Alas, two of the three employees had no idea what we were talking about. The third knew all about the program but sent us in the opposite direction of the office. We finally found it, checked in and waited for our names to be called. While waiting, I spoke with a woman up from Los Angeles who told me that the Global Entry interview calendar at LAX was booked out until the fall of 2014, hence the reason she came to San Francisco for hers.

Our interviews began promptly and consisted of a series of questions asked by a serious and unsmiling Customs and Border Protection officer. Why I had traveled to Turkey in 2008? What do I do on my annual trips to Mexico with my girlfriends? And what I was doing for 11 days in the Dominican Republic six years ago, were a few of the questions. Once I answered those, I was fingerprinted, photographed and sent on my way. Bob had a similar experience, although they had a longer list of questions for him. Six days later, while in Shanghai, we were notified by email that we had been approved effective immediately and we would be able use our Global Entry status for our re-entry into the US from China. Hooray for us!

We were not required to fill out the customs form on the airplane. And we were all set to waltz past the huge customs lines we were certain to encounter at SFO. Sadly, there were virtually no lines at customs. While we did speed more quickly through the kiosk than we would have with a customs agent, we had truly hoped for a long, snaking and slow moving line so we could give ourselves a pat on the back and feel like it was money well spent. Not this time though. Oh well, we’ve got a full five years and we’ll be ready for the back pat when that line comes. 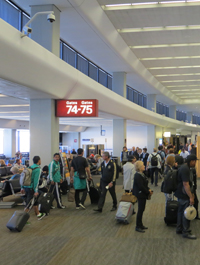 In the past two months, I’ve flown four times, and on each flight I was assigned boarding group “four.” In every case, my seat was in the rear of the plane. Also in each case, those seated in the front rows of the plane boarded first. Call me crazy, but it seems to me that airplanes should be boarding from the rear forward, so passengers in rows 20+ can get on before passengers in rows 10-20. While there was plenty of overhead space around me, as few people in my area had yet boarded, I found myself waiting in line at the front of the plane for the 10-20 row passengers to get situated and get their bags into the overhead compartment. Not surprisingly, this caused a big backup and thus took longer for all passengers to board the plane.

Airlines are huge multi-billion dollar businesses. Surely they must have conducted studies of the quickest boarding methods. My online research however, shows that the boarding procedure used by most airlines today is the least efficient method of boarding. I ask myself “how hard is it really for a huge corporation to try a more effective method of boarding, that will get more planes out of the gate on time?” Apparently, pretty hard.