Think about those establishments that you have encountered over the years that have left you with fond memories. Perhaps they were warm and cozy. Maybe they were fun and friendly. Or maybe they were just simply comfortable, homey and efficient, and without fuss or anything faux. Amsterdam has lots of places that tick all the boxes above, and each has a very high likelihood of leaving with you with just such memories – the locals know them as brown bars. 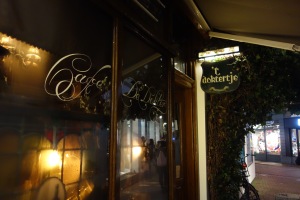 Amsterdam’s brown bars have a long history (the oldest, In Het Aepjen, dates back to 1519!) and there must be hundreds of them, as on our recent visit to the Venice of the North, every time we decided it was time for a beer and a bite, there was one nearby.

Brown bars get their generic nickname from their wooden interiors. And in almost all cases that wood has developed a warm patina from years and years of daily cleaning and polishing, constant use and, until recently, lots of cigarette smoke. Thankfully indoor smoking was banned more than ten years ago – long enough that there isn’t even any residual tobacco odor remaining.

On a chilly night last January, Nancy and I found a couple of stools at the bar of Café De Dokter. While tiny in size, Café De Dokter is big in atmosphere. With about eight stools at its low bar and perhaps five small tables against the wall, there’s room for about 20 if everyone on hand doesn’t mind cramming in, or a little bump now and then when a fellow patron wants to move about the 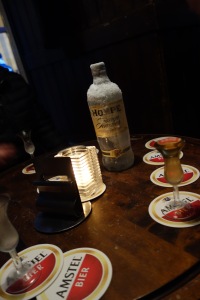 place. Opened in 1798 and known as Het Dokterjte (the Doctor) this brown bar is small enough for a single barkeep to keep everyone happy with beer, whiskey, wine, and snacks. The bar enhances its atmosphere with old jazz records played on an old record player, stuffed into a nook behind the bar. Also stuffed into a nook behind the bar is a small work area that houses a couple small wheels of cheese and some smoked meats that the barman slices and serves to order. He barely has room to move himself.

We also checked out Café Hoppe, which we were introduced to by Zosia, the leader of our Hungry Birds food tour. Hoppe is larger than Dokter, but on our late afternoon visit, was just as crowded and vibrant with a clientele that ranged from a table of retirees who appeared perfectly at home, to business folk enjoying an after work tipple, and everything in between – even a couple of tourists (us!). Here we sampled jevener, which is Dutch gin. There are two types, oude (old) and jonge (young). We preferred the oude, but both are tasty and go great with a snack of olives and cheese. 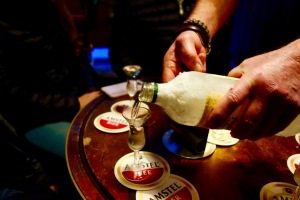 Brown bars, in a way, feel a little like a neighborhood clubhouse, and seem to cater to all its characters. And with their casual and unpretentious feel, they make a perfect spot to meet friends after work, or for a pre-dinner aperitif, or that final warm, languid nightcap at the end of an already memorable evening.

So when in Amsterdam, after you’ve marveled at the beautiful canals, houseboats and crooked buildings, and when you’ve finished strolling through the surprisingly tame red light district, and when you’ve dodged a few bicycles and made it to the dazzling Van Gogh Museum and the sobering Anne Frank House, you might just slip into a brown bar. It’ll be warm, cozy and friendly. And there’s sure to be one nearby.