If you grew up reading Peanuts comic strips, or watching A Very Charlie Brown Christmas every single holiday season like I did,

I’m certain you’d enjoy the delightful Charles M. Schulz Museum, in Santa Rosa, California, just as much as I did.

I watched most of the Peanuts television specials, and clearly remember rooting for Charlie Brown to talk to the little Red Haired Girl, wishing he would get more valentines, wanting Linus to see the Great Pumpkin, and desperately wanting Charlie Brown to kick the football before Lucy pulled it away. Thus, on a visit to my nephew at Sonoma State, I dragged him and one of my daughters to the Charles M. Schulz Museum, because although they vaguely know about Peanuts, I knew that it was something I’m interested in, and let’s be real, it’s all about me.

The museum opened 16 years ago in the hometown of Peanuts creator, Charles M. Schulz, and is home to several permanent exhibits including original Peanuts comic strips, other artwork by Schulz, and a recreation of his original studio. Some of the most interesting exhibits include Mr. Schulz’ high school artwork, which easily demonstrated his talent, as well as a bedroom mural, beautifully restored, which he painted in 1951 for his daughter in their Colorado Springs home. The mural features early Peanuts characters, including Snoopy on all fours.

Another great exhibit is a 22-foot high ceramic tile mural, created by Japanese artist Yoshiteru Otani, made up of 3,588 Peanuts comics. When viewed from a distance, the mural forms the image of Lucy holding the football for Charlie Brown. When you get up close, however, you can read each strip. It is impressive.

We took a free 60-minute, docent-led tour that day, which I highly recommend. Our tour guide was able to tell us all sorts of interesting facts about Mr. Schulz, and let us in on some of the secrets behind his characters, many of whom were based on real life, including the little Red Haired Girl (whom Schulz may or may not have pined for). We also learned that in 1968, at the suggestion of a reader, Schulz introduced Franklin Armstrong, an African American character and friend of Charlie Brown.

The Peanuts comic strip ran from 1950 to 2000, with Mr. Schulz writing and illustrating every single strip, on average about seven strips a week. It’s a part of my childhood, 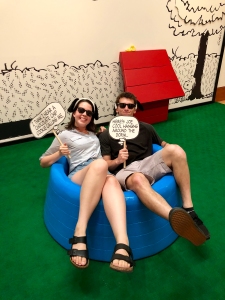 and if it’s a part of yours too, I’d suggest a visit to the Charles M. Schulz Museum the next time you’re in the Santa Rosa area.

Museum admission is $12, but students, children, and seniors pay a discounted fee.

The museum is not huge, we spent about an hour and a half there, and saw most everything in the building. As mentioned in the story above, docents lead tours on a regular basis during open hours, and I highly recommend taking part in some or all of the tour.

2 thoughts on “In the Book of Life, The Answers Aren’t in the Back”