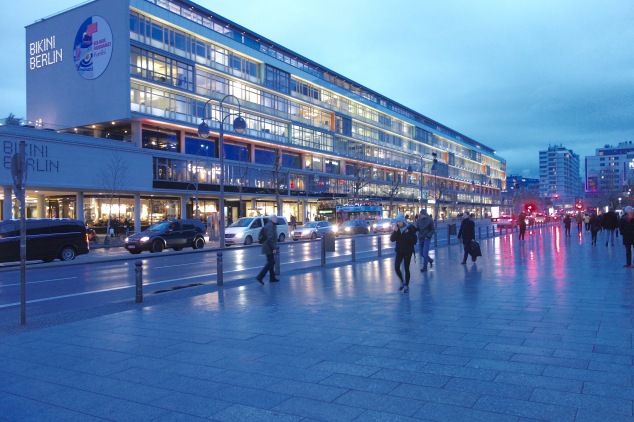 One of the many reasons I thoroughly enjoyed our visit to Berlin earlier this year was the city’s ability to seamlessly blend the old (history, architecture, and the like) with the new. Around practically every corner were sobering reminders of the past: the deep history of Germany, Jews in Germany, and life in a Nazi occupied State. This was tempered, however, by the present: young German families happily pushing strollers through street markets, modern and striking architecture, and many ethnic cultures living together with ease, at least from my perspective. It was a fascinating five days in a city I have read much about, and I was delighted to finally see it with my own eyes. While Bob had been to Berlin once before, it was in 1990, just months after the fall of the Berlin wall, so as you can imagine, much has changed, so for him it was like visiting for the first time as well.

We started with a visit to the Berlin Wall Memorial. This mile long open air park is located along “no-man’s land,” the former strip between East and West Berlin. The memorial is dotted with excellent signage and displays that tell the stories of people who tried (some with success and some with failure) to escape over and under the wall. There are markings of the exact tunnel locations that were dug under the wall, there are photographs of West Berliners who assisted in their fellow German’s escape from East Berlin, and even a small stretch of the preserved wall, complete with a guard tower. 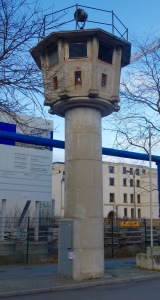 I learned so much from this outstanding Memorial. Almost 30 years later, life has moved on around no-man’s land. Homes have built up where once was the “death strip.” Vegetable and flower gardens dot the landscape, and children ride their bikes through the park, paying little or no attention to the history. Life moves on, whether we want it to or not.

Another day found us on a Rick Steves walk of the Reichstag and Brandenburg Gate. The Reichstag is the home of Germany’s government. A very modern and architecturally stunning building, admittance to the Reichstag is free, but reservations are required. Once admitted, you can ride the elevator to the glass dome, with a cone of 360 mirrors that reflect natural light into the legislative chambers below. The dome has a ramp that visitors can walk up to see the sights of the city from on high. Damaged during WWII by fire and air raids, the Reichstag was rebuilt in 1999. It is well worth making reservations, which we made online, but can at times be made on the spot. Note that ID is required.

Later in the day we took the U-Bahn, Berlin’s rapid transit railway, to KaDeWe, or Kaufhaus des Westens, as it is officially known, Europe’s second largest department store. Here we went straight to the 6th floor, devoted entirely to, you guessed it, food and drink. We browsed the food options, but really were intent on getting a seat at the Budvar Bar, where we had two beers each,

as well as potato and sausage soup and two pretzels. It was outstanding. There were many “old-timers” sitting in the bar, drinking beer and chatting with the highly efficient bartenders. Bob noted that when we settled up, the barman who took our money was not the one who had served us, but he knew exactly what we had eaten and drunk and quickly gave us the tab. That’s good service. It is definitely worth a stop, not to mention a beer or two.

We had a sobering visit at the Memorial to the Murdered Jews of Europe. More than 2700 coffin shaped pillars cover a Berlin city block, remembering the six million Jews killed by Nazis during WWII. The memorial was constructed in 2005, and Rick Steves says using the word “murdered” in the Memorial’s title was intentional and quite a big deal. We also went in the information center, which among other things, follows 15 Jewish families from all different backgrounds who all were murdered.

We walked a great deal in Berlin, exploring many different neighborhoods, including our Airbnb’s own, the Prenzlauer Berg neighborhood. What was once an area for artists, students, squatters and idealists, is now an up and coming hipster and young family district. We enjoyed beautiful architecture here, as well as a street market and the chance to see a renewed Berlin. We ended up at MauerPark, once—again—another area that used to be no man’s land between East and West Berlin.

Now a lively park, this neighborhood gathering place includes an 800 meter remaining section of the Berlin wall that is now known as a graffiti wall where artists paint their work, covering up what was once a sad part of history with a new and bright energy, not unlike Berlin as a whole.

I’m a big fan of Rick Steves guidebooks, as I believe they give updated and detailed information better than any other series out there. Steves’ Berlin guide is the best yet, as there was so much we learned on the walks detailed in the book. There were so many tiny sights that we would have walked right by if Rick wasn’t telling us where to look for them.

As I mentioned above, Berlin is quite big and spread out, so we took advantage of the excellent U-Bahn system to get to further distances in the city. Easy to use, the fares range from 2-4 euros depending on the distance traveled.

If you’re looking for an excellent gift from Berlin, we bought chocolates at an 150 year old chocolate shop, Rausch. Even if you’re not buying, it’s worth a stop to see huge designs on display, made out of chocolate. 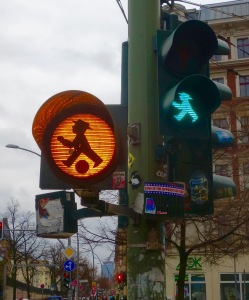 Another excellent shop is the Ampelmänn Shop, selling the iconic Berlin Ampelmännchen brand (little traffic light men). The Ampelmännchen is the symbol shown on pedestrian signals in Germany, and is one of the few features of East Germany that is still proudly recognized.