While Bob and I love to walk when we are traveling, we also enjoy taking public transportation. It feels like we are locals when we take the bus or train with regular folk who are commuting to work, school or the market. And coming from a country where public transit leaves a little something to be desired, it’s really delightful to get on a train in downtown Berlin for example, and five hours later, after watching the countryside slide by, arrive in downtown Prague. Heck if you stop at the market for some yummy treats and tasty beverages, it’s the perfect spot for lunch with a great view. 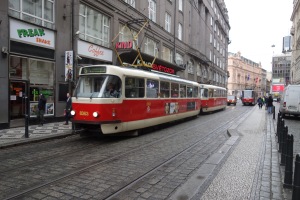 On our recent winter trip to Europe, we took advantage of all the public transit we could, from trams in Amsterdam to trains in Berlin and buses in Prague. All were easy to navigate, even when hauling our carry on sized suitcases. I’m not knocking taxis or Uber/Lyft (well, maybe I’d knock Las Vegas taxis), but if I have the choice, I’m almost always going to take public transportation.

I grew up in the San Francisco Bay Area. When I was about seven, the Bay Area Rapid Transit (BART) system opened, and I remember very clearly that it was the future. BART trains even went underground, through the San Francisco Bay, into the city. I spent a lot of time on BART in my day. In high school, I took BART home every day from school in Oakland to San Leandro. And once I started my career, I commuted by bus and/or BART to San Francisco from the East Bay on a daily basis. BART has improved a bit since then, but it still doesn’t come close to the public transit options in most European cities. Here are some of the reasons I believe European public transit is better.

Public transit in Europe is extremely convenient, and serves all cities. We can’t get on a train in Ashland, Oregon without driving at least an hour and a half to Klamath Falls for the Amtrak. Everywhere we’ve been in Europe, we have been able to take a bus or train to a major station and transfer to a train heading to another country. Easy as pie.

When a European bus, tram, or train schedule tells you it is leaving at a certain time, it really leaves at that time. And arrivals happen on schedule as well. We were one minute late getting to an Amsterdam tram stop one morning (I totally blame Bob, but bygones), and sure enough, the tram was disappearing around the corner just a short way past our stop. By comparison, Amtrak trains, specifically long-distance ones, have a remarkably poor on-time performance record.

The purchase of tickets is usually on the honor system and I enjoy not hassling with ticket slots and narrow turnstiles. You buy a ticket, validate it at a station, then get on the train, tram or bus. I’m sure the fines for not having a ticket are steep, and everyone I noticed seemed to have a pass or ticket that they validated.

It just seems so much more civilized. And yet at the same time, I don’t think for a minute that this would work in the States. We are, of course, a civilized nation, but I think too many people would not follow the rules.

Longer train rides are a delight, and so much more pleasant than flying. You can get up and move around. There’s no need to arrive two hours in advance. There’s significantly more leg room, no turbulence and, as mentioned earlier, there are interesting views out the window. There’s often free wifi too! And, with train stations often located right downtown, it’s usually much more convenient to get to the station as opposed to the airport. There’s also something so much more romantic about train travel. I half expect Hercule Poirot to come walking down the aisle, looking for a murderer. Not sure why I equate romance with murder though (watch out Bob).

Google Maps might be at its best when offering directions from one location to another via public transportation. It tells you exactly when the correct train/tram/bus is arriving, and what time you need to leave your location to catch said train/tram/bus. It also gives exact walking directions to the stop, and then the number of stops to your final destination once on the train, tram or bus. I’m a big fan.