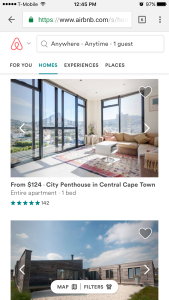 Last month a friend looking for travel advice told me about Travelzoo, an online site that publishes offers from thousands of travel, entertainment and local companies. They had found a package deal for a five-day trip to Barcelona for four people that included round trip air out of SFO and hotel, for under $4000. While that did sound like a good deal, I decided to do a little research myself (because I vainly often think I can do better), and came up with a significantly better deal: roundtrip from SFO and 7 nights at a charming, highly rated airbnb, all for under $3000.

I don’t share this story to brag (okay, maybe just a tiny bit), but rather to report that if you’re willing to do the legwork, package deals are rarely—in my humble opinion—offered at a better rate than if you piece a trip together on your own. Granted, their Barcelona deal was at a “five star hotel,” and the suggestion I put together for my friend was for lodging at an airbnb. But frankly, I’d choose an airbnb any day over a hotel, especially if I’m traveling with more than one person. Even if I don’t plan on doing any cooking, it is so much better to have room to move around a whole apartment or house, as opposed to a hotel room. I also feel like I am “living like a local” when I stay in a residential area as opposed to a hotel zone. And our experience is that an airbnb is almost always cheaper than a hotel. You might have to provide your own soap and shampoo, although they are often included, and you won’t get clean sheets and towels from housekeeping every day, but it’s still worth it.

I’m not suggesting Travelzoo does not have great deals. In fact, I’ve signed up to get their emails for travel offers all over the world. I like to see what is out there, and if nothing else, it will get me looking on my own to see if I can put something together for cheaper. Perhaps there are some package deals out there that are great bargains, but I’m kind of particular—some (ahem, BOB) might even call me picky. But I want to choose the lodging that is best for me, which is why I can spend way too much time looking at hotel reviews online. Plus, I’m always just a little bit suspicious. If Travelzoo can find an outstanding bargain, what else is out there? Apparently, I’m willing to surf the internet for hours and hours to find out.

One thought on “Wait Until That Deal Come Round”