If you asked me before the days of owning a travel store which countries had the best preserved Roman ruins, I would have said Italy (duh!). Little did I know that the Romans left their mark in countries all over the ancient world, and although there are indeed fabulous Roman ruins in Italy, there are also top sites in Turkey, Syria, Spain, Libya, Jordan and more.

Before our bike tour of Jordan began, Bob and I took an extra couple of days to visit two fantastic Roman ruins north of Amman and fairly close to Syria. The first was in the city of Jerash, the ruins of the Greco-Roman city of Gerasa. It is said that these ruins are the best preserved outside of Italy, and they are outstanding. Everything from a hippodrome and theater to a colonnaded street still paved with original stones that are rutted from chariot wheels. The oval forum, surrounded by 56 columns, was particularly impressive, as were the columns that, 2,000 years after being built, still sway with the wind. This is a great site, fabulously preserved, but with little signage and no shade. And it is big. We were glad for our guidebook and water bottles on the day we visited. 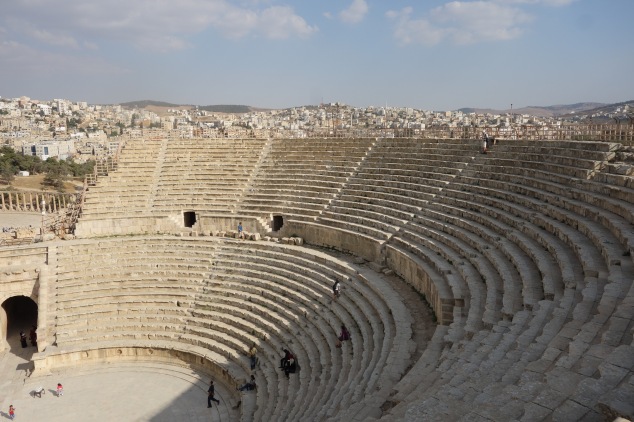 Outside of the ruins of Gerasa, Jerash is surprisingly not a tourist city. Indeed there are just two hotels in the city of more than 50,000 people. It seems that tourists come to Jerash on day tours to see the ruins, then bus right back out. We stayed overnight, at Hadrian’s Gate Hotel, a lovely hotel run by a family originally from Yemen. It was here in Jerash that when we walked into town to find an ATM, we realized that locals don’t see many tourists, particularly women who are not wearing headscarves and whose pale lower calves are exposed to the sunlight. We also strolled to another part of town for a dinner of hummus, falafel and shawarma, and children hung out of their car windows to get a closer glimpse of us. No television was needed this night, as we were the show.

While the ruins of Gerasa were fairly quiet, another great Roman ruin further north was virtually empty. Umm Qais is located in the northwest corner of Jordan, above the Jordan Valley. Although the ruins of the Decapolis city of Gadara (now called Umm Qais) are smaller than those of Gerasa, they also include the remains of an Ottoman Village, and much of the city was constructed with black basalt, which makes them incredibly striking. We explored a well preserved theater and church/temple, and also got a close up view of a mausoleum/crypt, that gave off Indiana Jones-like vibes. Umm Qais offers great views of three countries, Jordan, Syria, and Israel. We loved our visit here.

We had hired a driver for 60 Jordanian Dinar—about $84—to drive us from Jerash to Umm Qais, Ajloun Castle, the ruins of Pella, and then drop us in Madaba. After visiting Umm Qais, we asked our driver to take us to a locals spot for lunch. Sameer didn’t speak much English, so he called the hotel owner who had arranged our transportation for the day, and he was able to translate our request. Sameer stopped at a local joint along the road, and we had falafels in pita with tomatoes, pickles and fries. (Ashlanders might recognize this as similar to the old Happy Falafel’s “bomb” sandwich.) It was delicious, and two falafel sandwiches, along with two sodas, cost 1.3 Jordanian dinar, less than $2.

At times we were less than 10 miles from the Syrian border, and we would never have known. Twice we were stopped at checkpoints along the road, and soldiers manning the checkpoints looked at our passports. One time a Jordanian soldier asked “Nancy?”, and when I responded with “yes”, worried about what he might ask me, he replied with the phrase we heard again and again on this trip, “you are welcome.”