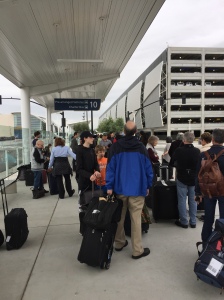 When traveling overseas last month, Bob and I flew on Alaska Airlines out of Medford, Oregon, to San Francisco—via Portland, Oregon—to catch our Turkish Airlines flight to Istanbul. San Francisco was apparently having some significant weather delays, so our flight out of Portland was delayed, and delayed, and then delayed again. Finally, we were told that our plane would take off shortly, but not to SFO as ticketed. Instead we would fly to San Jose, and then be bused about 45 minutes to SFO. We originally had a six hour layover in San Francisco, and thank goodness we booked it that way, as we ended up getting to San Francisco with just enough time to grab a quick snack and board our Turkish Airlines flight.

The flight to San Jose went just as planned, but the busing, well, let’s just say that left something to be desired. The Alaska gate agents had an extremely difficult time communicating with the bus company in charge of picking up the Alaska passengers and getting them to SFO. We were told the buses would leave San Jose within 20 minutes of our deplaning, but it took the two buses over an hour to get to our waiting point. We could, however, see the buses from where we were waiting, but they (for some strange reason) could not get to us. They kept driving around and around on the wrong access way. Needless to say, many passengers got a little angry. Anyone who had a tight connection in San Francisco was out of luck. For that matter, even those with a generous connection time (2-3 hours) were out of luck. Passengers unfortunately started taking their anger out on the Alaska gate agents, who were trying as best as they could to get the buses to come to the right spot. But the buses continued to drive by us, just slightly, and ridiculously, out of reach.

Finally the buses arrived and we made our way to SFO. Bob and I were fortunate enough to be sitting in front of a three year old girl who sang “The Wheels On the Bus” almost the entire time. Frankly, it was refreshing to hear this little girl happily singing after watching too many adults throw temper tantrums. Because apparently, it’s not just babies on the bus who go “whaa, whaa, whaa.”

Delays happen. We don’t have to be happy about it, but we also don’t need to take out our wrath on other humans. We’re all just doing the best we can.