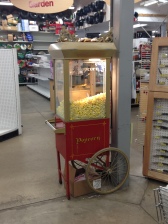 Have you ever noticed that hardware stores have some of the friendliest employees? I can’t tell you the number of times I have walked in to my local hardware store, Ashland Hardware, during the 22 years I’ve lived here, and been reminded that it is lovely to be helped by nice, knowledgeable people. It’s also fun to get a free bag of popcorn while you’re shopping!

I kind of love hardware stores in general. There’s something about their orderliness. They always stock about a million things (or more!) and yet employees always know exactly where everything is, and how everything works too. And hardware stores really do sell everything, or at least it seems like they do. And necessary items—screws, nails, etc.—sell for pennies a piece!

Thus on our trip to the South last Spring, when Bob mentioned taking a detour to Tupelo, Mississippi, to visit Tupelo Hardware, a store owned by a customer and friend, AND the place Elvis got his first guitar, I gave an enthusiastic thumbs up. I didn’t think we could go wrong with some musical history, some southern charm, and of course, some nails and screws. And boy, was I right. This two-hour stop turned out to be one of my favorites on our southern musical odyssey.

Walking into Tupelo Hardware is like walking into a time capsule. It’s old school, with well worn wooden floors, shelves that reach to the ceiling, and those fabulous library-style, built-in, rolling ladders that allow employees reach the highest of high-up items on those shelves. The feel, the smell, the organized clutter, and the employees, all add up to an ambiance that you just don’t get at Home Depot. Sorry, but Lowe’s doesn’t measure up either.

Adding to its mystique and giving it its place in American musical history, is the story of a young woman named Gladys who in 1945 brought her son to Tupelo Hardware to buy him a birthday present. Apparently, he wanted a rifle, but his mother didn’t really like that idea. She also told him that a bicycle was too expensive. In the end, with the help of one Mr. Forrest L. Bobo, she talked him into a guitar. The price—$7.75 plus tax. And that my friends is how Elvis Presley, the King himself, got his first guitar! 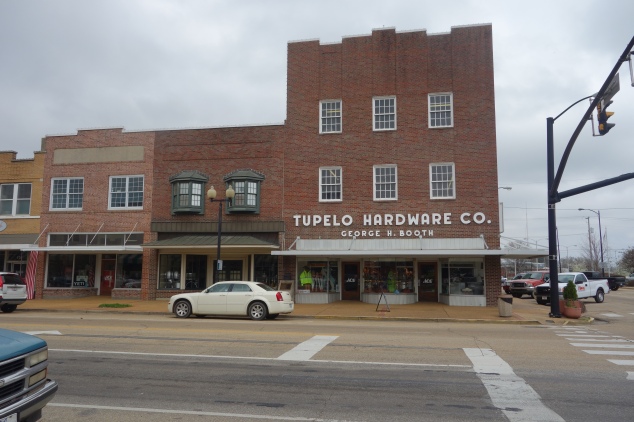 But Tupelo Hardware isn’t just about the guitar. This family-owned business was founded by George H. Booth in 1926, and is run today by George H. Booth II and George H. Booth III. And you won’t meet nicer people anywhere. On its main sales floor, like all good hardware stores,  they pretty much have one of everything. But on our visit, our good friend George II instructed his son George III to take us on the VIP tour which included a visit to the store’s upper floors. There we found shelves upon shelves and boxes upon boxes containing an amazing array of screws, nuts, bolts, and so much more. Much of it was decades old and just waiting until the day somebody needs it.

People visit Tupelo Hardware from far and wide for tools and supplies. And everyone seems happy to spend a few minutes shooting the breeze with employees and other customers. And they’re always happy to share the story of their slice of Elvis history. They still sell guitars too, so if you are thinking about taking up an instrument, there’s definitely some mojo on offer at the corner of Main and Front Streets in downtown Tupelo.