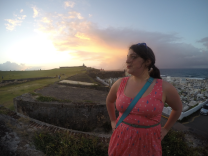 Born and raised on the Big Island of Hawaii, Sabrina grew up surrounded by all things Japanese. She studied the Japanese language for five years and was involved with the Japan Wizards—a competition of Japanese language and culture.

So when Sabrina had the opportunity to visit Japan with a group of her friends while in high school, she was very excited. They traveled through Osaka, Kyoto and Tokyo. Kyoto, she explained, was her favorite. She loved the juxtaposition of ancient buildings next to the modern skyscrapers and apartment buildings. Kyoto was filled with modern amenities, right next to ancient temples. Both beautiful in different ways.

While in Kyoto, Sabrina and some of her friends decided they wanted to know what it was like to wear a traditional geisha costume, so they went to a special shop where they carefully wrap and paint you in traditional garb and make-up before taking professional photos. The geisha clothing is so restrictive, that the women dressing them continuously asked if they were okay, “daijoubu desu ka?” After slow, careful hours of being bound, wrapped, painted, and adorned, they got to pose for photos.

Tokyo was a different experience for Sabrina. She was enthralled and amused by the vending machine options available to her—“Hard boiled eggs, beer, underwear, ice cream… Mmmmm, green tea ice cream – green tea everything. I had as much of that as possible.” She was not as fond of all the fish in Japanese cuisine, but she managed to get by. Her favorite food on the trip was green Japanese melon bread – it was light, fluffy, delicious and tasted like green melon.

Sabrina finished high school in Hawaii before moving to the Rogue Valley at eighteen to attend Southern Oregon University. She got her Bachelor’s degree in Printmaking – her medium of choice, inspired by her love of Japanese woodblock prints. She even met her boyfriend of five years in a Japanese class, there.

Sabrina is also very fond of insects, and often incorporates them into her art. She likes to wear them, too – jeweled beetle brooches and large, exotic ants encased in resin tied to her wrist. She is captivated by their beauty. She also loves to garden and cook, pickle her own produce, and make jams. She never slows down, and she is currently working on an art show to go up at Weisinger Family Winery next month. 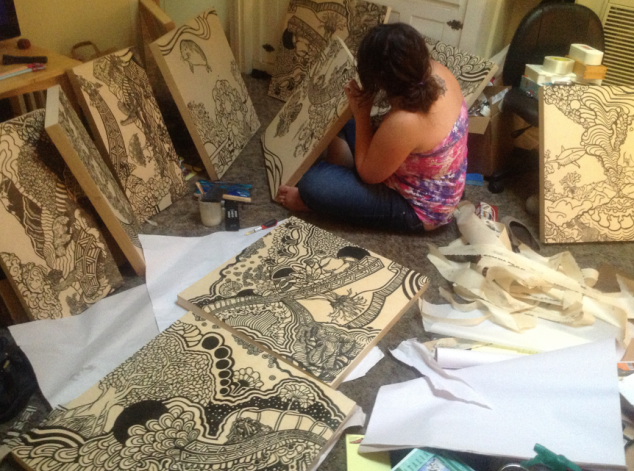 As for adventures, Sabrina’s thinking she’ll visit Germany next, to go through the Black Forest, and take a wine and bike tour by the Rhine and Mosel Rivers, and over into France. “I dream of finding and purchasing an amazing cuckoo clock and eating rich Black Forest Cake,” she said. “Also, Rieslings are the best.”