My favorite scene in the 1979 movie Escape From Alcatraz is the one where Clint Eastwood’s character Frank Morris finally crawls through the hole he has painstakingly made with a spoon in his cell wall and begins his escape. The first time I saw it, I was a teenager, and I couldn’t help but root for the bad guys. And even though no evidence has ever been found to determine whether they drowned or made it to the mainland, in my heart, I wanted to believe they were safe.

Fast forward to our visit to Alcatraz this summer. Seeing the tiny cells, including the famous one that Morris escaped from in 1962, I had to admit that I’m still rooting for the bad guys, and hoping that Morris and his two fellow escapees, the Anglin brothers, have lived a quiet life in a desert town somewhere outside of Taos, New Mexico. (I know what you’re thinking, Nancy watches way too much TV.)

Alcatraz is a beautiful juxtaposition — on the one hand you have an island perfectly placed in the middle of beautiful San Francisco Bay, offering stunning views of the Bay Bridge, the Golden Gate Bridge and San Francisco’s skyline. And on the other hand, you have what remains of a maximum security prison, from which there are almost no windows to the fabulous vistas, only cold, cramped jail cells, empty since the prison’s closing in 1963.

The tour is quite good, self-guided with audio, and takes about three hours to complete. We had tickets for the second boat of the day leaving Pier 33. Tickets cost $30 each, and often sell out many weeks in advance.  The ferry ride over to Alcatraz is in and of itself a great tour, and we stood outside at the back of the boat to watch the San Francisco skyline in our wake. On approach, Alcatraz Island is certainly foreboding. There are lots of crumbling buildings, with seagulls hanging in the air looking for scraps, and it ain’t called The Rock for nothing. While small parts of the island boast meticulously maintained gardens, mostly it’s rocky, desolate and bleak, ideal for a scary movie, or a story about a prison break. 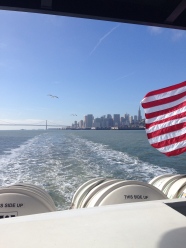 The tour takes you through all the main sections of the prison, including rows and rows of cellblocks, the military morgue, the cafeteria, the warden’s office, and the recreation yard. The rec yard is right at the edge of the Bay, with great views over to the City, but the walls are so high that inmates couldn’t see outside the prison. It’s easy to see why prisoners would have wanted to escape such a place. The audio includes interviews with prisoners and guards, and gives you a great idea of what life was like from both perspectives on Alcatraz. A former inmate was even on the island the day of our tour, chatting with visitors and signing copies of his book. Bill Baker was on Alcatraz for four years, beginning in 1957. At age 80, Prisoner #1259 is happy to answer questions and talk about his experiences on The Rock.

It is certainly unlikely that convicted armed robber Frank Morris and John and Clarence Anglin made it to the mainland, through the strong currents of the cold and shark infested waters of San Francisco Bay in their raft allegedly made of scraps of prison raincoats. But what kind of Hollywood ending would that be?