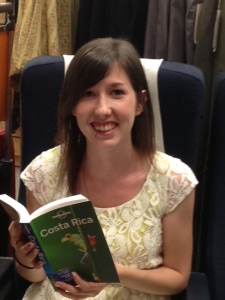 Born in California, Lauren has spent most of her life on the West Coast of the United States – growing up in Tacoma, Washington, for many years before moving to Portland, Oregon. When it came time for college, she chose Southern Oregon University in Ashland because she has family in the area and loves the small town feel and abundant culture of the Rogue Valley. In her spare time, Lauren likes to hula-hoop, and she has one trusty travel hoop that she’s taken with her on trips to both Mexico and Canada.

A lover of language, Lauren studied Spanish in high school, and took her first international trip to Costa Rica when she did a six-month study abroad program. She was placed with a great family, who she has gone back to visit several times since.

In college, Lauren took some French classes, but she decided she wanted to do something different – so, she found a study abroad program in Thailand. She loved being immersed in a completely new culture, and a language she didn’t speak at all. “The Thai language is really beautiful, and so different from ours, it seems almost alien,” she said wistfully. “And the Thai people are so friendly – they always smile and make eye contact. Not like Americans.”

Over the course of her four-month study, she got to take a few trips within the country, visiting rural rice farming villages in northern Thailand’s Mae Chaem district, and beautiful ancient ruins and temples in Sukhothai and Ayutthaya – where she saw the biggest golden reclining Buddha statue she could have ever imagined.

The final trip her group took was to a Lisu village, up in the mountains. The village’s livelihood comes from growing diverse crops – coffee, tomatoes, sugar cane and string beans, and everything in between. On Lauren’s 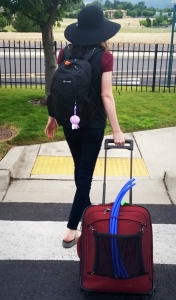 twentieth birthday, her group hiked up to visit the fields of fresh fruits, vegetables and legumes, where they were promised lunch. But out amongst the crops, away from any structures or kitchens, Lauren wasn’t sure how that would be accomplished. To everyone’s delight, their hosts lay down palm leaves and proceeded to prepare a feast of raw salsas and fresh beans, with fresh sugar cane to chew on, too.

Since most of Lauren’s travels have taken her to Central America and the Far East, she plans to see Europe next. “Spain, because I speak the language,” she told me. “But also France. Rural France, as well as Paris.” And, she added, “I’ll have to take my hula-hoop, too!”