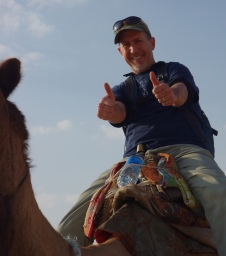 What was the best thing about being on a Camel for the very first time? Was it that my camel was huge? Was it that when my camel stood up, hind legs first as they do, I was unexpectedly tipped waaaay back in the saddle and found myself waaaay off balance, waaaay, waaaay higher up off the ground than I ever expected? Was it that the metal saddle had no padding, felt way too small and offered next to nothing to hold on to? No, here’s the best part: in charge of this enormous, living and snorting, bouncing and heaving desert SUV was an 8-year-old boy named Alsee. Yes, I was about to enter one of earth’s most inhospitable regions, India’s Thar Desert (aka: Marusthali or, Land of the Dead), with a third-grader as my guide. Of course, it turns out he was in complete control, but the first 10 seconds of my camel safari did not fill me with confidence. 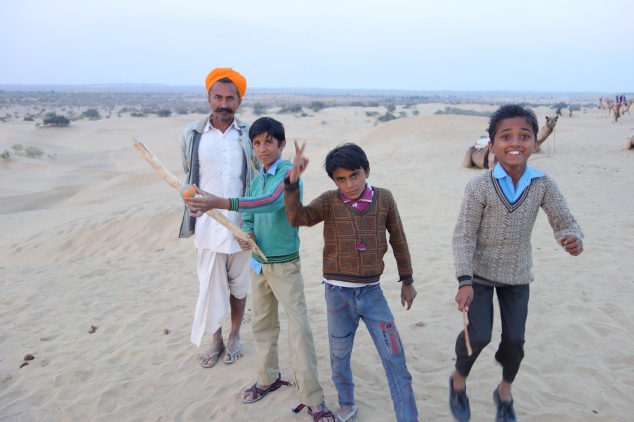 Soon enough though I got used to the unwieldy ride and began to enjoy it. Though still it was bumpy enough that letting go with one hand to dig into my pocket for my camera and trying to take a snapshot while moving felt like living on the edge.

After about 10 minutes we came to our first watering hole stop and our guides, two more 8-year-olds and their boss who looked about 50, helped us dismount from our camels. Fortunately the getting off is not quite as hairy as the getting on. We were messing around and trying to communicate with our guides when one of us picked up a large stick and pantomimed the swing of a cricket bat. Within seconds one of the boys was off like a shot to a nearby village and before you could say “Snickometer” (that’s a cricket term by the way) he was back with a ball and the cricket game was on! 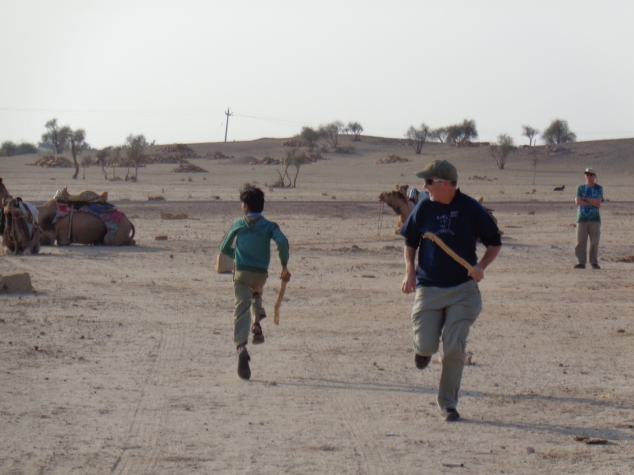 “Team Phun!” versus the finest junior players in all of India! And since a pick-up game of cricket is a whole lot like a pick-up game of baseball it was no problem for us foreigners to get the hang of it. It was a fabulous interlude of bowling (cricket’s pitching), batting, fielding, running between the wickets, trash talking, and high fives and fist bumps. There were bowl outs, there were biffers, there were caught outs, there were leg breaks, and even a couple of sixes, which is cricket’s home run. Other than a couple of body parts that nowadays simply refuse to cooperate, it felt like we were all eight years old again. Everyone had such a good time that we did it all over again at our next stop. 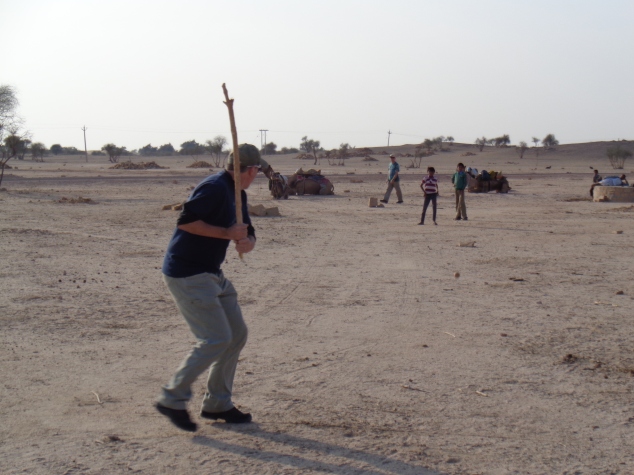 After a couple of short rides through flat desert scrubland we entered the dunes. And it was just like the movies, with rolling hills of sand, its pristine surface picturesque in texture, perfectly rippled by the wind. Soon we came to a high ridge where we once again dismounted, threw the ball around some more with the boys and enjoyed a frosty beverage purchased from a vendor who suddenly appeared with a shoulder bag full of ice-cold beer out in the middle of nowhere. With only the rolling dunes of the Thar Desert to be seen in all directions, we watched the sun go down. It was pretty sweet. 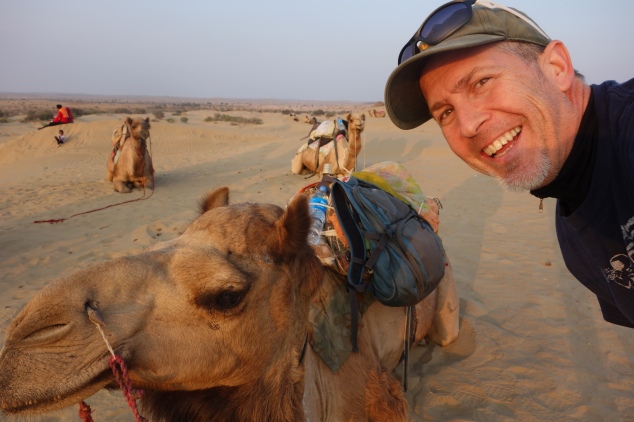