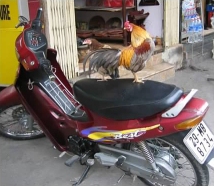 The first thing we learned when riding in a car or trying to cross the street on our recent trip to Vietnam is that there are few rules of the road, and the rules that do exist are followed by even fewer people. Speed limits? Nah! Stop signs or lights? Nope (well, a few, but mostly nope). Right of way? You have got to be kidding! To better understand how traffic works, here is some background. Saigon (whose proper name is Ho Chi Minh City) is a city of about eight million people. Within the city, there are four million motorbikes. There are cars, but not very many. Cars are of course, much more costly, and they don’t maneuver nearly as well through the crowded city streets.

Very few motorbike riders bother to wear helmets, particularly within city limits. Helmets are very expensive and very hot in the tropical climate. We saw hundreds of children on motorbikes, with no helmets, riding around with mom or dad, or both! In fact it was common to see a family of four piled onto a single motorbike, baby in the front (we’re talking young baby too, six months old maybe), Dad driving the bike, older child behind Dad, and Mom bringing up the rear. Our girls were fascinated, and our record sighting was five people on one motorbike—a man and four children!

It wasn’t just people on motorbikes that we found fascinating. Often it was what they could, and would, load onto their motorbike. The Vietnamese use these motorbikes to ingeniously transport an amazing array of goods. We saw two men and one large computer on a bike, two men and several large glass windows on a motorbike, a man with dozens of dead chickens, and much, much more! The most amazing load we saw was about twenty 24×24 flats of eggs. It may seem impossible but I saw it with my own eyes and did the math three times on a calculator, this motorbike appeared to be transporting over 10,000 eggs!

Another interesting traffic feature in Vietnam is the almost complete lack of lights at intersections. For the most part drivers just slow down a bit, honk, and head on through. Even at red lights, drivers rarely stop, instead, as above, they slow down, honk and head on through. Honking seems to be the favorite pastime of drivers. Rather than honking for a reason, like drivers in the United States and Europe, drivers in Vietnam honk constantly to announce their presence. In fact on our 30 mile, 45 minute private car ride to My Son, Bob counted the number of times our driver honked —778 times!

Cars, motorbikes, and even pedestrians do not seem to give anyone the right of way at any point. It is survival of the fittest on these roads, and if you are hesitant, you won’t get far. That includes crossing the street. There are no crosswalks, and not one single car or motorbike will stop for you when you want to cross. Thus the only way to cross a street is to slowly wade out into oncoming traffic, and keep moving slowly forward no matter what. Cars and motorbikes will ultimately maneuver around you, swerving slightly to miss you by inches on all sides, but if you wait for any reason at all, you will be waiting all day! Older people walk right in front of cars and motorbikes as do children and bicycle riders. Crossing the street was hard to get used to at first, but after a while even Emily and Sarah didn’t flinch when we would cross the road holding hands. Now you might think that a kindly older woman would see a bewildered western family with young children wanting to cross the street and would slow down. Not a chance. Everybody follows the same rule, and that rule is every man for himself!

The city streets are unbelievably busy, seemingly at all times of the day and night. The Vietnamese do not seem to sleep and the streets don’t quiet down until well after midnight, and by 6am are teeming with people again. Kids are playing ball on the side of the street, and in some cases in the middle of the street. Older men are playing cards right on the curb, rice is drying right along the edge of the road. People are selling every item imaginable, even on the shoulders of busy highways. And then of course there are the animals. You can be driving on a “highway” at 60-70 miles an hour, and come across an oxen pulling a cart, or have to slow down for cows or chickens in the road. Dogs are everywhere as well, constantly darting in and out of traffic. Most cities have no sidewalks, so when walking around, you’re actually walking along the edge of the street. Restaurants along with motorbike parking often occupy most of the sidewalks that do exist, and you must get used to eating a meal outdoors amongst the mayhem.

It was amazing to come home to little Ashland, and see cars actually come to a complete stop at a cross-walk as people would begin to cross the street. The lack of rules in Vietnam may seem crazy, but after getting used to it, I have to admit, it seems to work just fine. It was another great life lesson in how different cultures do things differently, and just because we’re used to one way, it’s not necessarily the right way.

—Nancy Bestor is the co-owner of Travel Essentials. She always looks both ways when crossing the street.