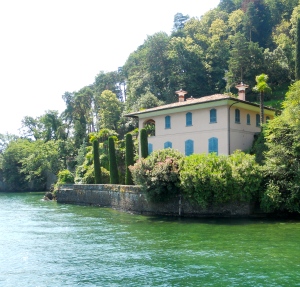 It’s easy to see why movie stars and other famous and wealthy Americans vacation on Italy’s Lake Como.  In addition to being very glamorous, Lake Como offers great food (of course it does, it’s Italy, right?), fabulous walks and views, and stunning villas and gardens. We spent four days there last summer, and by the end I was ready to adopt the Gucci sunglasses and high-heeled lifestyle of a fashionable Italian woman and lounge on the shores of Lake Como permanently. (If you know me at all, you’ll know this is a huge exaggeration—an outright lie really. I couldn’t wear high-heeled Italian shoes if my life depended on it.)

We rented an apartment for four nights in Bellagio, called Residence il Borgo,  that we found on the internet for 110 euros a night. It could not have been better. The apartment was centrally located, and afforded us the opportunity to buy food and drinks at markets that we prepared in our very own kitchen. We sampled locally made salami, prosciutto, pasta, goat cheese, local bread, and more. We did dine out at a water-front restaurant once, sitting under an umbrella drinking glasses of prosecco, and pretending we were way cooler than we really are, but mostly we saved money by cooking our own meals. The owner of the apartment, Flavio, was delightful, and did his best to help us in whatever we needed. It was surprising how relaxed he was about getting payment. We actually had to track him down to pay the night before we left. 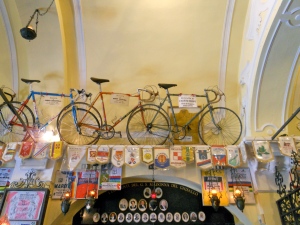 One of our day’s activities included a visit to the Museo del Ciclismo near the Madonna del Ghisallo Church, on a mountaintop about 15-minutes by car from Bellagio. It was Father’s Day when we visited, and since Emily, Sarah and I had forgotten all about it until an Irishman taking our picture reminded us, we guiltily told Bob we would happily do whatever he wanted that day, so a trip to the cycling museum was our pleasure. It was an expensive cab ride, costing 30 euros each way, but when you take into account the fact that we had forgotten to even say Happy Father’s Day to Bob, and he did not bat an eye, I really got off pretty cheaply.

Originally the patron saint of travelers, in 1949 the Madonna Del Ghisallo became the patron saint of cyclists. Over the decades the tiny chapel has become a shrine to the sport and is packed to the rafters with bicycles, jerseys, trophies, photos and posters.  It is free to visit and also features an eternal flame burning for cyclists who have died. Next door is the Museo de Ciclismo (entry fee 6 euros) that covers both the history of the bicycle along with a more in depth history of bicycle racing.  It includes lots of great photos and lots of old bicycles, including a firefighters bike and a bike devised for a traveling knife-sharpening business as well. The mountaintop location is the apex of a big climb during the annual Giro di Lombardia bike race. 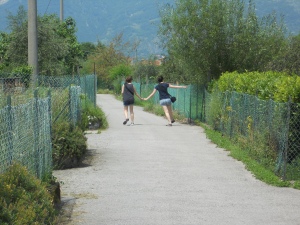 Another day’s adventure was a walking tour of the hamlets of Eastern Bellagio, that we learned about from a free tourist office brochure. This took us through many lovely small villages and back alley walkways that we never would have seen otherwise, and included stops at cemeteries, views of fancy villas, and ancient churches. We spent some time shopping the streets of Bellagio as well, where I bought fabulous locally made leather sandals (no heels whatsoever). 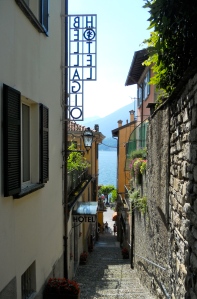 It’s not cheap to get around to other cities in the Como region, as water taxis are the only option, and a family of four can cost as much as 60 euros for a 45 minute ride. Thus we mostly stayed put and enjoyed Bellagio and its immediate surroundings.

Vacationing in Lake Como really is a slice of “Lifestyles of the Rich and Famous”. We saw Italian newspaper photos of Leonardo diCaprio and George Clooney eating in a restaurant that were taken just a few days before our arrival. With a little planning however, you can pretend to be rich and famous just like we did, and not break the bank too much.