I’ve watched a lot of soccer in my life. For someone who’s not a huge fan, I know waayyyy too much about yellow cards and red cards, offside traps and corner kicks.

It all started in college, when I began dating a man who had played soccer since he was a young lad, and continues to play as an adult. I spent many a cold Sunday afternoon in the Bay Area watching him kick a ball up and down a field with his mates. Often I was the team’s only fan (what a dedicated girlfriend I was, right?). 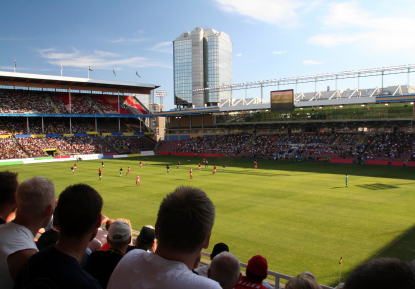 I’ve watched lots of “important” soccer games on television too. There was the 1994 World Cup (Brazil v. Italy), watched in a small Ashland apartment with about 20 fans. (I was pregnant with our first child, and delighted that Emilio Delgado, Luis on Sesame Street was also there.) Then there was the 1998 World Cup (Brazil v. France) that we watched at a French friend’s home. Our family came with French flags painted on our faces. The best game I’ve ever seen on tv however, has to be the European Champions Cup semi-final (Germany v. Italy) that I watched at an outdoor restaurant in Verona last summer.

You see, while the soccer itself interests me somewhat, it’s the things that surround soccer that I find far more fascinating (the Emilio Delgados and the face painting for example). So I was happy to keep one eye on the game, being broadcast on a large flat screen tv perched in a window, and the other on the Italians watching the game around me. Those Italians take their soccer seriously. I nearly laughed out loud when the woman behind me started muttering “Die, Mario, die” to Italian player Mario Balotelli, as he would run up the field with the ball. (I later learned that “dai” means “come on” in Italian.) Then she would yell “Bravo, Mario, bravo.” (This one I knew.) She would also mutter “mamma mia” over and over, almost as if she were praying the words.

Look closely and you’ll see the television cable snaking from the red apartment along the cobblestone and into the restaurant!

I also enjoyed watched the table next to me, an Italian man and his two Italian women, one surely his teenage daughter and the other his…..wife? Mistress? Companion? I’m not sure of her title, but she wasn’t much older than the teenager, and both young women were dressed and made up in true Italian style. The man wasn’t looking too shabby either.

By the end of the game, when Italy won 2-1 and advanced to the finals, there was a large crowd standing around the outdoor restaurant, watching the final minutes and cheering for their national team. Even the waiters and cooks quit working and came outside to watch the finish. As we walked back to our apartment, cars honked their way through the streets, and fans waived Italian flags out the windows of their cars and apartments. The restaurant proprietor Pierro said he didn’t care what happened in the final. It was enough to beat Germany. Bravo, Italy, bravo.