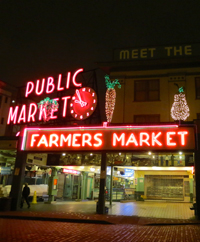 Emily and I took a quick trip to Seattle in January for a visit to Seattle University. It was the weekend before her finals, so we didn’t have a lot of time to dawdle, but because we are who we are, we managed to cram a few delicious bites of Seattle and Portland into our packed 36 hours.  That is, of course, how we roll.

We left Ashland around 2pm on a Friday afternoon, and stopped in Portland to gas up and grab some dinner to go at Cedo’s Falafel on NE MLK Jr. Blvd. We split a falafel and gyro. One came with a salad, and the other with delicious Cedo’s potatoes, for about $15. The food was outstanding. Cedo’s doesn’t have many offerings besides falafels and gyros on its menu, but why bother with other items when the ones you do have are so delicious?

We pulled in to our hotel in downtown Seattle about 9:30pm, the Crown Plaza on 6th Street. I booked it on hotwire.com for $79. It was a steal. The hotel was excellent, and in a fabulous location, just a short walk from Pike’s Place Market. If pressed I would have paid the $40 to park our car in the hotel garage overnight, but as luck would have it, we found free street parking just half a block 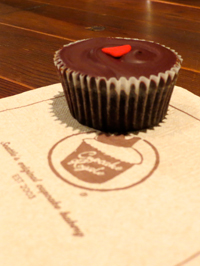 from the hotel. Since we were in the “big city” and it was only 9:30 on a Friday night, we decided to walk to Cupcake Royale for treats and then walk down to Pike’s Place Market, even though it was closed, and check out the scene. I am so glad we did. We’ve visited Seattle and Pike’s Place Market several times before, but always in the middle of the day when it feels like there are thousands of people bustling and bumping into us. The streets around the market gave off an eerie vibe that night, and even with shuttered stalls and shops, it was great to walk around.

We strolled around again the next morning, about 7:30am, when Pike Place Fish, the spot famous for throwing fish, was just putting out its offerings, and the vegetable stand its beautifully colored produce. The aromas escaping the bakeries were delightful, as fresh loaves and pastries were popping out of the ovens. We had time for a light breakfast at The Crumpet Shop at Pike’s Place Market, on 1st Avenue. The Crumpet Shop first opened 37 years ago, and is now run by the original owners’ friendly son. Emily had a crumpet with pesto, ham and ricotta cheese on top, while mine sported pesto, tomato and parmesan. It was the perfect amount of food, and delicious to boot.

Emily spent the day in sessions at Seattle University (so sad, too bad), but I had time to shop around the city, and naturally, eat more food. Lunch was with my sister-in-law and brother-in-law at a Puerto Rican restaurant in Ballard, La Isla Seattle . I ate a large portion of the Pernil Special, a yummy slow-roasted and marinated pork shoulder. After lunch we headed for cupcakes at yet another Cupcake Royale shop, but on their recommendation, I saved the little room in my stomach for a cupcake at Trophy Cupcakes, which I visited later in the afternoon. I much prefer Trophy Cupcakes to Cupcake Royale, but I am, of course, a cupcake snob. 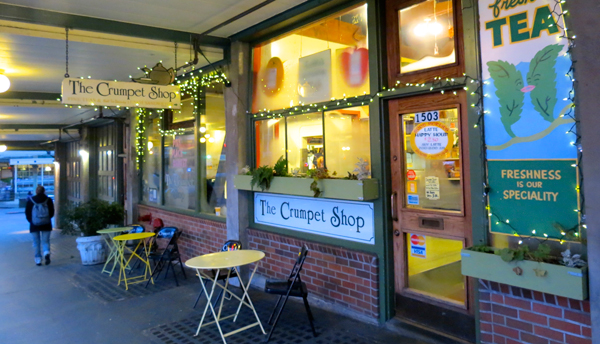 Portland was our next culinary stop. We pulled out of Seattle at about 5pm, and headed straight for Natural Selection, a vegetarian and mostly vegan restaurant recently featured in Sunset magazine. Our 8pm reservations were perfect, as we were hungry and ready for culinary deliciousness. We each ordered the four-course price fixe menu, for $40. Chef Aaron Woo changes the menu every two weeks, and offers two options for each of four courses.  We were very happy to eat half of each one, then trade. My favorite may have been the Roasted Beet Carpaccio, with blood oranges and sunchoke cream. It may also have been the Chickpea and Delicata Ratatouille, with turnips, brussel sprouts and coconut lentils. While I’m not sure of my favorite, I am sure that our meal was delicious, and neither of us missed any beef, chicken or fish.

We intended to head after dinner to the Salt & Straw, a handmade ice cream shop just down the street. We were surprisingly full from our vegetarian feast however, and the line at the highly recommended ice cream shop was out the door. Instead we drove to our hotel, the Marriott Waterfront, which I booked on Priceline.com for $70. Once again the parking gods were with us, as we found a free street spot right next to the hotel. We rolled our full selves (and our suitcases) into our room, crawled into our beds, and passed out in a food coma.