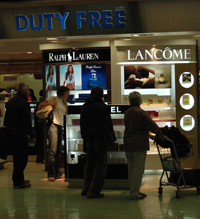 I can’t be the only traveler who leaves another country with foreign currency in her pocket and decides to “get rid of it” by spending it in a duty free shop at the airport. I’ve bought Toblerone chocolate time and again (come on, it really is delicious), Bushmills Irish Whiskey, and Absolut Vodka to name just a few items. What does it say about me that the duty free items I’ve chosen are chocolate and alcohol? I have been tempted by much more, including makeup, watches, and sunglasses.  The way I look at it, I’m both spending the last of my foreign currency AND saving money right? Not necessarily.

I went to my handy resource, the , ahem, the Internet, to see if duty free really is a money saver. Duty free is exactly what it implies, the purchase of goods without duty, or local import tax. Take Bushmills Irish Whiskey for example. If you want to buy this in, say, Paris, purchasing it in a duty free airport shop would save you the duty that France puts on this imported item, and that French stores add to the purchase price. This tax can be anywhere from 5-25%. But is it really cheaper than the same bottle bought in the United States? In an article on budgettravel.com, reporter David Farley found that prices vary by city, and although some things (alcohol and cigarettes) can be cheaper at duty free than in the United States or other countries, other things (perfume, handbags, makeup, etc.) are generally more expensive.  Electronic items are rarely found in duty free shops, because the largest duty free customers are Japanese, and they have plenty of cheap electronics in their own country.

Frommers says that the best duty free purchases are those that you’ve researched ahead of time, and determined really are cheaper in a duty free shop.  But where’s the fun in that? If you can’t pass up duty free shopping Frommer recommends buying liquor and wine from their country of origin that are also hard to find in the United States.

Does this mean I’ll stop buying chocolate and alcohol at duty free shops? Probably not, but at least I’ll know its because I’m bored and might as well spend the last of my cash on something rather than because I’m getting a great deal. I know, I know, I could just save my foreign currency until I visit that country again, but Toblerone chocolate is so much tastier when it’s purchased at a duty free shop, isn’t it?