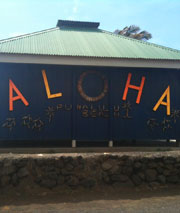 Bob and I snuck away from work and from our two teenage daughters last month for a quick trip to the Big Island of Hawaii. My goals for our trip were, in no particular order, relaxation, fruity drinks, hiking, and snorkeling. We had no set plans, just a copy of Hawaii The Big Island Revealed, by far the best travel guidebook series for Hawaii. Once we arrived and got the fruity drink supplies purchased, we made plans for accomplishing my goals.

We did a bit of snorkeling on our own near Kona, but decided to book a last minute zodiac boat snorkeling trip with Sea Quest. For about $80 each, the boat captain and his assistant took our group of 10 to a couple of fabulous snorkeling spots, including Captain Cook’s Monument. It was a little like Disneyland’s old Submarine Voyage, only real of course, and 100 times better. We swam along coral reefs with turtles, needle nose fish, polka-dotted puffer fish, eels, rainbow-colored fish, bright yellow butterfly fish, and much more. Amazingly, it got even better after snorkeling as our captain took the boat right into the middle of a pod of spinner dolphins. For 15 minutes we sat still and watched more than 100 dolphins jump and swim all about our boat. They were close enough to touch. It was incredible.

Another guidebook recommended outing had us slowly nosing our rental car down several miles of dirt road located between mile markers 82 and 83 off the Queen Ka’ahumanu Highway. We were headed to Kiholo Bay, a deserted yet absolutely spectacular stretch of beach and rocky shore. It was perfect for hours of exploring. Walking along the shore took us past two stunning homes, Earl Bakken’s (inventor of the Pacemaker) sprawling mansion, complete with a guard sitting (or was he sleeping?) in a chair under a tree, as well as the hand-carved and completely self-sustaining Bali House, built and owned by the co-founder of Paul Mitchell hair products, John Paul DeJoria.

After drooling over these homes, we stopped for a dip in the Keanalele Waterhole, also known as the Queen’s Bath. This freshwater lava tube bath, just 80 feet from the ocean, is open to the sky in two spots, and we had it all to ourselves. 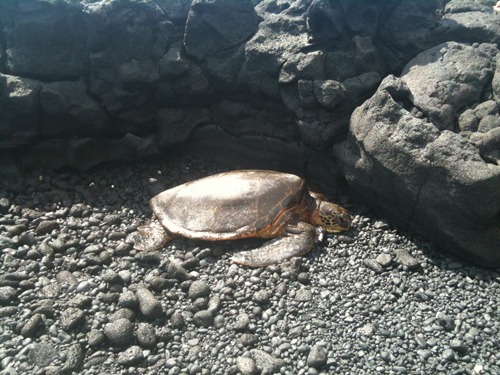 Finally we continued on foot to Kiholo Bay’s lagoon, where we saw turtle after turtle after turtle, both large and small, swimming near the shore in the crystal clear ocean and sunning themselves on the sand and rocks. It was beautiful.

For more on our trip to Hawaii, keep a watch out for our winter print newsletter, coming to your mailbox (or electronically to your email in box) later in November.