On our recent trip to Hawaii, our outbound flight was delayed four hours in San Francisco. We left Medford at 5:30 am, and then had to wait from 7am until 1pm at SFO before continuing our journey to Kona. Let’s see… We had breakfast, which killed about 45 minutes. Then we walked to the bookstore and bought a couple of magazines (another 15 minutes). Then we sat, and sat and sat and sat. Shockingly, Bob even grew tired of reading box scores on the internet. Ironically, when we finally boarded our United flight to Kona, the in-flight magazine included a letter from the United president, apologizing for increased delays on United flights nationwide, saying they strive for “on-time performance.”

In a recent look at travel news, I noticed that in September, American Airlines posted record delays, with anywhere from just 50-70% of flights arriving on time, far below their target of 82%. They too apologized, with an email to their frequent fliers saying that an unusual amount of mechanical delays and pilots calling in sick 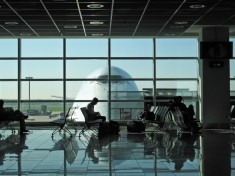 resulted in the slowdown. I’ve read that the airline industry’s overall percentage for delayed departures fluctuates between 15-25%, with certain airports & airlines reporting much higher and lower delays. An American Eagle flight, with a route from Newark to Raleigh/Durham is the worst offender. This flight is delayed by an average of 48 minutes 73% of the time. That’s right—73% of the time.

If my business offered bad customer service 73% of the time, I’d have no customers in weeks, maybe even days. If we had a product that failed 73% of the time we’d immediately stop offering it and we’d find something better. Airlines can apologize all they want. But the proof is in the pudding. I don’t want to wait four hours in San Francisco because of a plane change. I bought services based on quoted schedules that worked for me. If I’m not getting those services, I deserve some kind of a refund. It’s just too bad the airlines don’t see it that way.