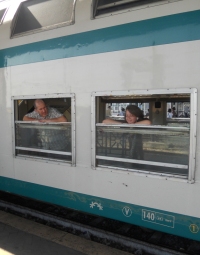 There’s something very special to me about riding trains in Europe. Whether I’m in the bucolic mountains of Switzerland, or heading in and out of big cities in Italy, I love traveling by train. I feel as though I am traveling “old school”. While not as convenient, it is far more relaxing to sit on a train and watch the landscape slide by accompanied by a good book than it is to fight both traffic and a map figuring the best way to get from point A to point B via a rental car. We rode the rails of Northern Italy this past summer and here are a few things we learned.

We always take food on the train. There is not always a food car, vending machine, or a snack cart, even on train rides that are several hours long. We were in the Milan train station on several different occasions on this trip. The first two times through we had very short layovers and purchased snacks at the first place available. Both times we bought the same BAD paninis from the Milano Bar Centrale which is located in the heart of the station. Bob tried hard to get our sandwiches heated (they either chose to misunderstand or really did not understand his rudimentary Italian). He also tried to get salami or prosciutto, but we always seemed to end up with ham. Not even good ham, more like a bologna-type ham. On our third visit to the Milan station, with a bit more time on our hands, we finally found a better option and got honest to goodness Italian paninis and pastries for the next leg of our journey.

When your train is ready and waiting on the track, you really should get on. You might have to sit and wait a while in a hot, stuffy car, but it’s better than missing your departure. Two Italian women left several shopping bags on seats and then got off the train to smoke. Without a bell, whistle or warning of any kind, the train doors automatically shut and the train rolled out at its appointed time. Their bags were on the way, but they were not, much to the dismay of the train conductor, who had to collect their belongings and put them off a few stations down the line. When the conductor came to retrieve their bags, she spoke heatedly to me. I’m sure she was complaining about the carelessness of “some people”. I rolled my eyes and nodded my head in agreement, having no idea what she had just said, but understanding exactly what she meant. I’m sure I looked very Italian.

Tickets must be validated at the station (usually at a machine on the track) before boarding. The conductor will come through the train and check everyone’s tickets. If yours is not validated, you’ll incur a hefty fine. We saw several Italians in heated arguments with conductors. One young woman was in tears. The conductors did not budge. In fact, on more than one occasion we saw them chuckle at the excuses offered.

FB (FrecciaBianca) trains are much faster and much nicer than REG (Regionale) trains. FB trains travel at higher speeds, skip small stations and offer much more comfortable seats and air conditioning. Passengers on the FB trains are often business commuters and older tourists, while the REG trains hold everybody else. Of course FB train tickets are more costly and also, as we soon were to discover, require advanced seat reservations for rail pass holders.

The destination of an Italian train is rarely listed on the train itself, and the signs at the track don’t always work either. By checking the reader board to see which track your train is leaving from, and then checking with your fellow passengers or a railway employee, you can be assured that you are in the right location. In every instance, for the many different trains we boarded in many different railway stations, the reader board was correct. We still asked though, because I am more than just a little neurotic.