My parents have owned a travel store since before I was born, thus I’ve been traveling my whole life. I grew up traveling with three other people: my mother, my father and my sister. Starting when I was two years old, when we went to Croatia and Italy, we evened each other out with the perfect mix between adult stuff and kid stuff. I’d always have someone to complain with me, be tired with me and keep me company lagging behind on the hikes. In arguments, it was two versus two, always a tie, even though Mom and Dad usually won. Everything was right, and perfect, then came our trip to Italy this past summer.

It was normal for the first two weeks, but then Emily left for Paris by herself, and it began. Two against one–two parents, one kid–they had such an unfair advantage. As a young child, I loved being the center of attention, so you’d think one week without Emily would be heaven in my eyes, but it was not as it seemed. Having four eyes on you and only you everyday and every dinner is hard. Too many questions to answer and too much talking. 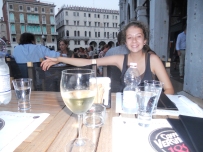 Things got easier, as they began to run out of questions, and started talking about their own stuff that I wasn’t interested in. So, I started bringing books to dinner, and talking to my imaginary friend (ha ha).

Four people fit around the table perfectly, four people can split into two groups and no one will be alone, four people can share a hotel room with two beds perfectly, but as it turned out, three wasn’t all that bad either. I often got to choose the treat (gelato!) we would have in the afternoon, I got to use the computer and internet as much as I wanted, and I got first choice of the best seat on trains, boats, and planes. I got used to being an only child, but then Emily came back and it was weird all over again. Soon I’ll have to get used to being the only kid again, as she is going to college next year. This’ll be interesting.

–Sarah Bestor is a sophomore at Ashland High School. She really did have an imaginary friend when she was two.