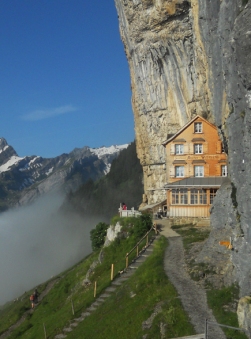 Our return tickets from Italy had us flying out of Zurich early in the morning. We knew we’d have to get to Switzerland the night before, so we began to look for a hotel. At the advice of my father-in-law, an expert on travel in Germany, Austria and Switzerland (I’m not sucking up here, he really is an expert), we decided to stay near Appenzell and catch an early train to Zurich. Rick Steves’ Switzerland guidebook recommends taking the 15-minute gondola to Ebenalp, at 5,300 feet, for a true rustic Swiss experience.

Never one to question Rick Steves’ recommendations, we quickly made reservations at the Berggasthaus Aescher. Built in 1805, this guesthouse is built into a cliff. If you were skimming over that last part, this dormitory style lodging is built into a cliff. The guesthouse itself and the stunning views from the outdoor dining area, are the most spectacular things I have seen in Switzerland.

Getting there is no easy feat, but that just adds to its charm. Sarah, Bob and I took the cable car (27 Swiss Francs roundtrip for each adult) and then hiked down the mountainside from the Ebenalp station. The walk takes about 12 minutes and passes through a cave, past a hermit’s house (I couldn’t make this up if I tried), and finally past a 400-year-old cave church. 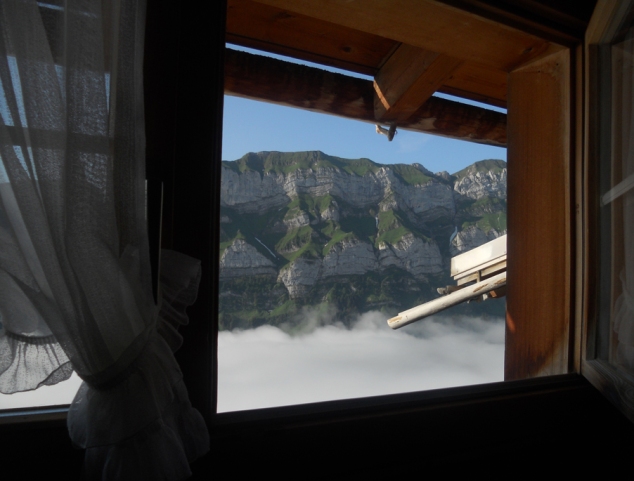 We arrived in the early evening and Claudia, the owner, met us and showed us upstairs to our dormitory room (see our view in the above photo). There were at least twelve “beds” in the room—bed length cushions that lined up right next each other, but fortunately we had the room to ourselves. It turned out we had the whole guesthouse to ourselves that night. Many people came up the mountain for dinner, either by cable or hike, but we were the only ones staying overnight.

Our dinner was cooked by Claudia’s husband and served by Claudia and one waitress. We all had Rösti, a Swiss dish similar to hash browns, but waayyyy more delicious. Our cable car operator told us that the Berggasthaus Aescher has the best Rösti in all of Europe, and although I haven’t tried Rösti everywhere, Aechser’s was truly fabulous. Bob’s dinner included smoked sausage, and mine pork steak with gravy, while Sarah stuck with the Rösti by itself. By the time we finished our meal, the restaurant was filled with mostly Swiss patrons who were drinking beer and eating Rösti to their heart’s content. As the cable car stops running at 7pm, these revelers had no choice but to hike back down the mountain—in one group’s case with torches! As you might expect, many of them had quite a few drinks throughout the evening and being co-dependent, I did worry for their safety. 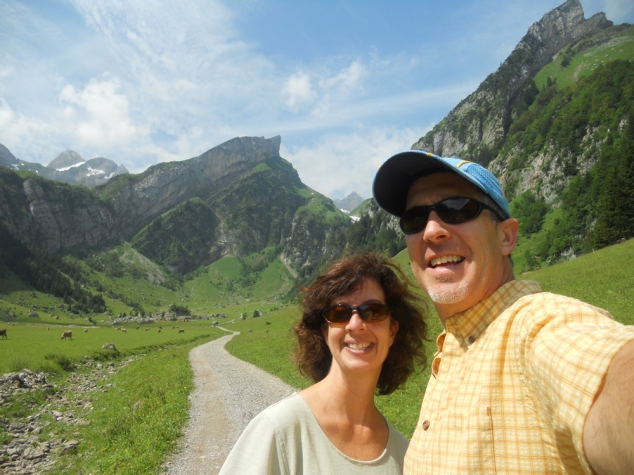 After our dinner, it was still light out and we hiked/explored for about 30 minutes, checking out the guesthouse animals that include sheep, pigs, rabbits, a dog, and chickens. We slept quite soundly that night in the fresh mountain air.

The next morning we enjoyed a Swiss breakfast of fresh coffee, bread, and cheese all while taking in the stunning mountain views and listening to the gentle tinkling bells of the sheep and cows, grazing on the mountainside. Bellies full, we decided to hike down to Seealpsee, a lake 1100 feet below. While the hike was strenuous, the views of the lake and its surrounding little village were like something out of a storybook. 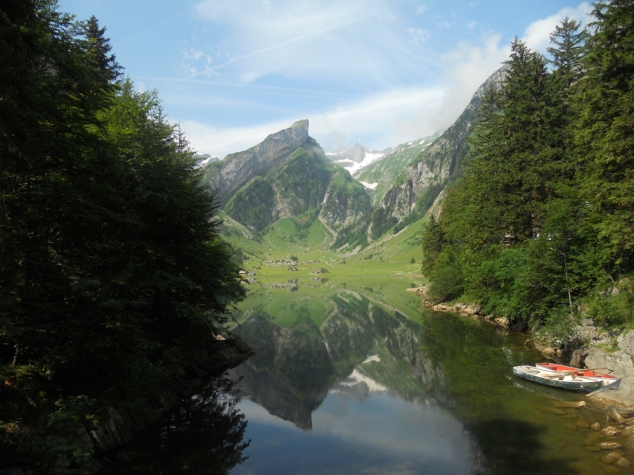 Notes Before You Go: