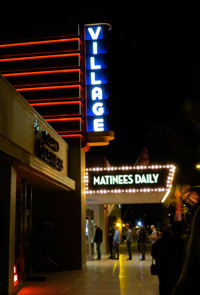 Ever since I can remember, I loved going to the movies. When I was a pre-teen, living in the Bay Area, it was quite a popular summer activity to get a ride to the local theater and see whatever looked good. I have fond memories of waiting in line for the epic films of my youth (don’t judge, they were epic to me), like Grease, Rocky, Ode to Billy Joe (with Robby Benson!) and of course E.T. and Star Wars. Bob and I saw Back to School with Rodney Dangerfield on one of our first dates; I’m pretty sure I asked him, too. My neighborhood movie house was a four theater box of a building, but every now and then, as I got older and more cultured (well, a little more cultured anyway), I’d venture farther afield and see a movie in a classic theater, like Oakland’s Grand Lake Theater.

I love small and quirky movie houses, and the West Coast boasts some great ones. Portland, Oregon, of course, is home to many. The McMenamins Pubs & Breweries  have some of the most unique, where one can drink a beer, eat a piece of pizza and watch a flick all while lazing on a comfy overstuffed couch. The Kennedy School Theater is housed inside the Kennedy School, which until 1975 was a Northeast Portland elementary school. It was refurbished by the McMenamins and reopened in 1997 as a hotel, restaurant, movie house and more (I’m quite fond of the Detentions Bar). Another McMenamins movie spot that I’ve enjoyed is the Bagdad Theater in Portland’s Hawthorne district. The Bagdad opened in 1927, and is perhaps most famous for the 1975 Oregon premiere of One Flew Over the Cuckoo’s Nest with special guests Jack Nicholson and producer Michael Douglas.

The above-mentioned Grand Lake Theater has always held a special place in my heart. When Bob and I were dating, we’d often drive to see a movie there (and maybe even hold hands during the show!). We’d try and plan our visit to a time when the always entertaining Mighty Wurlitzer organ was being played before the movie started.

When I’m out of town, and perusing the movie listings, I often base my decision on where the film is showing. On our family’s recent trip to San Diego, we decided to see The Hunger Games and hoped for a unique place to see it. We were lucky enough to happen upon Coronado Island’s art-deco theater, the Coronado Village Theater, which first opened in 1947, then reopened in 2011, after a 10-year closure and significant renovation. 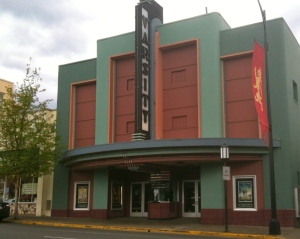 My hometown of Ashland, Oregon, has its own sweet movie theater. Yes, there’s a larger “big city” style theater on the outskirts of town, but the Varsity Theater, a block away from Travel Essentials in downtown Ashland, features a classic neon marquee and mostly shows smaller run independent films. Built in 1937, the Varsity boasts five screens, some in very small and cozy theaters. It is also home to Ashland’s own outstanding Ashland Independent Film Festival (AIFF), now in its 12th year.

I hope to get to more little movie houses around the U.S., and see more tear-jerkers like Ice Castles (oddly enough, also starring Robby Benson). But come on, vampires at twilight? They just don’t make love stories like they used to.