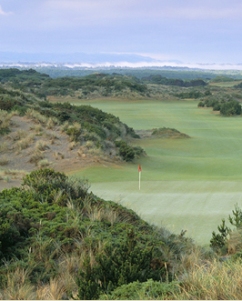 Every winter, great portions of Ashland’s modest little 9-hole golf course turn into a swampy and boggy mess that swallows golf balls and threatens to suck the shoes right off your feet with every step. I had just tromped through yet another waterlogged fairway looking for yet another plugged golf ball when I first heard the rumor. It was late 1997 or early 1998 and the rumor was that “some rich guy” had bought land on the Oregon coast near Bandon and was building a traditional, Scottish-style course.

Like all golfers who dream of playing the iconic links of Scotland and Ireland I was more than just a little intrigued. During a post-round pint with my foursome, however, we all became a bit skeptical. Who outside of Oregon had even heard of Bandon? Who in their right mind would invest the time and money to build in such a remote location? And who would ever fly to Portland and then drive another four hours to get to Bandon?

Soon thereafter the rumor was confirmed to be true and it seemed that every golfer in southern Oregon had Bandon Dunes on their brain. What little details there were caused speculation to run wild. The “rich guy” was a greeting card magnate who had already built a couple of courses. He had a reputation as a perfectionist who loved golf and in particular loved the feel, the challenge and the rugged natural beauty of Scotland’s greatest golf courses.

Prior to its official opening day of May 1st 1999, there were already reports from local golfing insiders, pros, and greens keepers who had been able to play preview rounds that Bandon Dunes was the real deal. Nothing short of a fabulous links course on some of the most ruggedly beautiful land the west coast of North America has to offer.

So in early May of 1999 I found myself, along with my Dad, paying my greens fees to a couple of guys in a small shack next door to a half-built lodge and on the edge of an empty parking lot. We had the place to ourselves that day and amazingly it exceeded our very high expectations. Neither of us had played an ocean side links golf course before and it was great fun playing through the towering and rolling dunes. And despite the strong wind and rain (typical Oregon coastal weather) it was a great, great day. 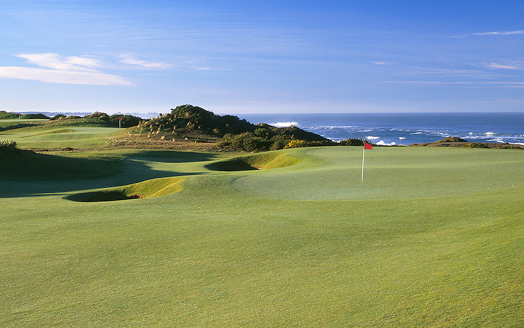 Twelve years later the facility has grown to boast four world-class courses, a par-three course and a practice facility that is as big as our 9-hole muni here in Ashland. It also features several on site restaurants and pubs and about 200 guest rooms.

At Bandon Dunes it’s all about the golf. There are no spa treatments, no Jacuzzis, no live entertainment and no diversions for the kiddies. So it’s really not a couple’s destination unless both like to golf. And it is definitely not a family resort.

In addition to the golf courses being top notch, the service throughout the facility, including greens keepers, wait staff, shuttle drivers and check-in staff is all excellent. The feel of the service is neither elegant nor fancy. Instead it is one of friendly competence, efficiency and understated enthusiasm. To me it’s just right.

The only drawback is that Bandon Dunes is now so renowned and successful that a round of golf during the summer months runs an eye-popping $225 for resort guests and $275 for non-resort guests.

Fortunately Bandon offers winter packages that are just as eye-popping in their value. I’ve managed to get over to Bandon every winter for the past six years, taking advantage of the value deals, and this winter was no exception. In December, our $390 per person package included two rounds of golf, two nights accommodation, two buffet breakfasts and one dinner. A fabulous value for as good a golfing experience you can hope for. These packages are not listed on the resort’s web site so you’ll need to call. Prices vary slightly depending on which winter month you book.