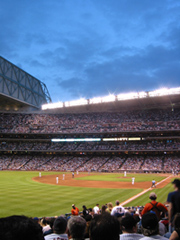 It’s October, and for many Americans, October means playoff and World Series baseball. I grew up on baseball. My dad was (and still is) a big fan of the Oakland Athletics. We lived just 10 minutes from the Oakland Coliseum, and since I was the second of two girls, I was my Dad’s last hope for a child who would be interested in his (and America’s) favorite pastime. I don’t actually remember going to baseball games (sorry Dad), but I do remember the glory years of the Oakland A’s, and going to their World Series Championship parades in 1972, 1973 and 1974. I remember Rollie Fingers with his handlebar mustache, Mr. October himself Reggie Jackson, owner Charlie O., and my favorite player, Bert “Campy” Campaneris.

Somehow, I married a big baseball fan too—and believe it or not, a big Oakland Athletics fan as well. In the early days of our relationship, I spent a lot of time at the Oakland Coliseum, watching baseball, drinking beer, and thinking that nighttime baseball games, when you’re not dressed warmly enough, are just too damn long. When Bob and I got married, we traveled the USA in a Volkswagen bus for five months (read the full story here). We saw lots of our country’s greatest sites, ate in a bunch of fantastic regional specialty restaurants, and yes, we visited lots of ballparks too. We saw games at Tiger Stadium, the Seattle Kingdome, Wrigley Field, and Yankee Stadium. And we were extra fortunate (no sarcasm here, really) to see our Oakland A’s win at both Fenway Park and Camden Yards.

Now we live in a state without a major league team, and I must admit that I find myself waxing nostalgic over those early days at the Coliseum. Tickets were cheap, beer vendors still roamed the stands, and I fondly remember many a Saturday afternoon, sitting in the warm sunshine of the upper deck and cheering on the team. Hot dogs at the ballpark tasted better than anywhere else and a ballpark Coke is a Coke like no other.

Sure when we travel to “the big city” in another state we can go to a baseball game, but it’s not quite the same. And since we’ve now been married 17 years, if we were at a nighttime baseball game, and I wasn’t dressed warmly enough, I wouldn’t just THINK that baseball games are too damn long. I’d say it out loud and simply leave.